COSA TI SEI MESSO IN TESTA / WHAT’S ON YOUR HEAD

A history and geography of hats

A “naked ape”: according to Desmond Morris’s definition, human beings retain their ancestors’ fur almost exclusively in one place, i.e., their heads. Despite being equipped with a natural covering of the head, man felt the need to double it with an artificial headgear, i.e., the hat.

The exhibition space is imagined as a container of objects and suggestions, where the immaterial and multimedia dimension becomes crucial for the story. The hat is twofold: it can be “above the head”, as an object, or “inside the head”, in the imagination. This idea is translated into a path formed by a long corridor where hats are displayed in showcases, thereby dealing with the hat as an object (“above the head”), and by four video installations which creatively explore the hat as an expressive language (“inside the head”).

The first video installation, entitled The Roles and Names of the Hat, consists of a wall of sixteen screens, in front of which a multitude of brass hat holders seem to watch the video as inert spectators. In the second room, The Imaginary Hat, a ceiling of screens recreates imaginary skies. The latest video installation, entitled The Matter of the Hat, is a floor of screens that visitors can walk on, pierced by poles that support hats.

Aiming less at explanation than suggestion, this path allows the audience to experience directly that even a hat, like any man-designed object, has an inexhaustible linguistic and expressive potential. 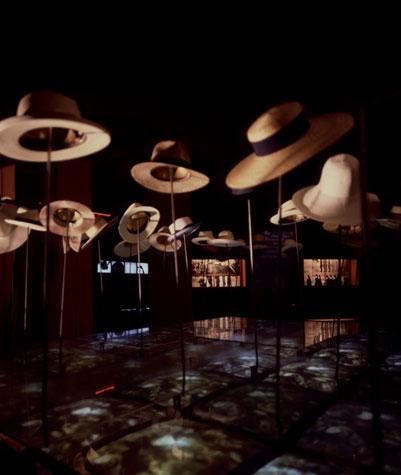 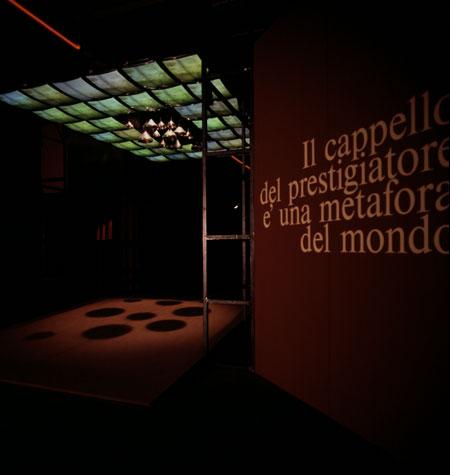