In 1982, Fabio Cirifino, Paolo Rosa (1949-2013) and Leonardo Sangiorgi started a project which, over the years, has explored the poetic and expressive possibilities of new technology languages. In 1995 until 2011, Stefano Roveda, expert in interactive systems, was also part of the project. Having created video environments, interactive spaces, produced theatre and film performances and having considered the very pathway that the visitor takes in the exhibition space, their artistic trajectory is multi-disciplined and draws upon the knowledge and varying backgrounds of their dynamic team. 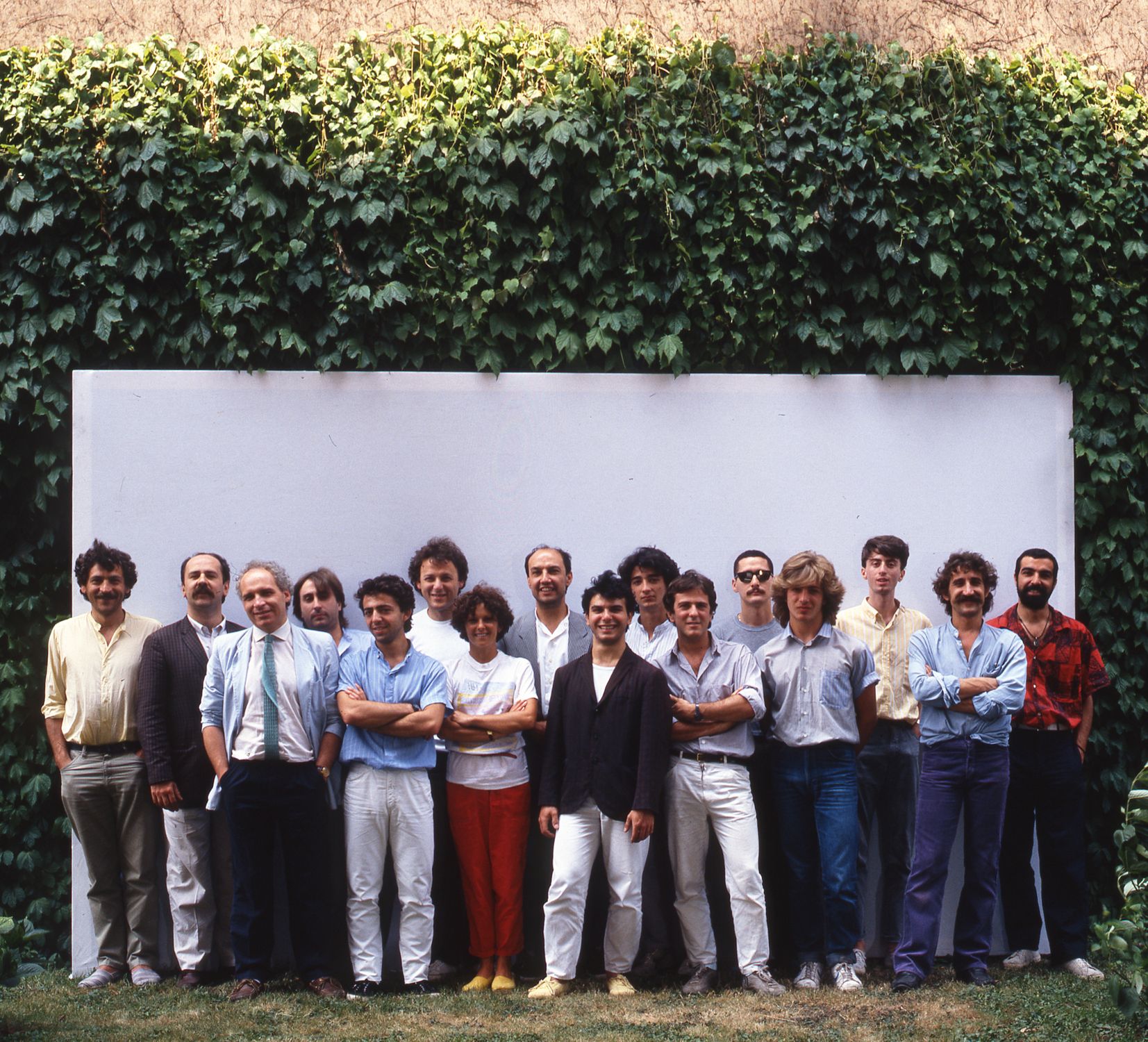 In the beginning, their artistic research focused on creating video environments, in which digital image and physical environment play together to emphasise the role of the spectator and the pathway they take through the installation.

Created by a heavily connoted setting, short video sequences and the composition of the monitors, the video environments are narrative vehicles which seek to deconstruct the screen.

In the 80s, some of the works, particularly those with recurring themes of the human figure and nature, are dependent on the spatial and social context in which they are projected (Luci d’inganni 1982, Il Nuotatore 1984, Vedute 1985).

In the 90s, Studio Azzurro’s research expanded to the sensitisation of monitoring systems typically used by the military, such as thermal, infrared and x-ray cameras, making visible aspects of the world that can’t be perceived by the human senses (Il viaggio 1992; Il giardino delle cose 1992). 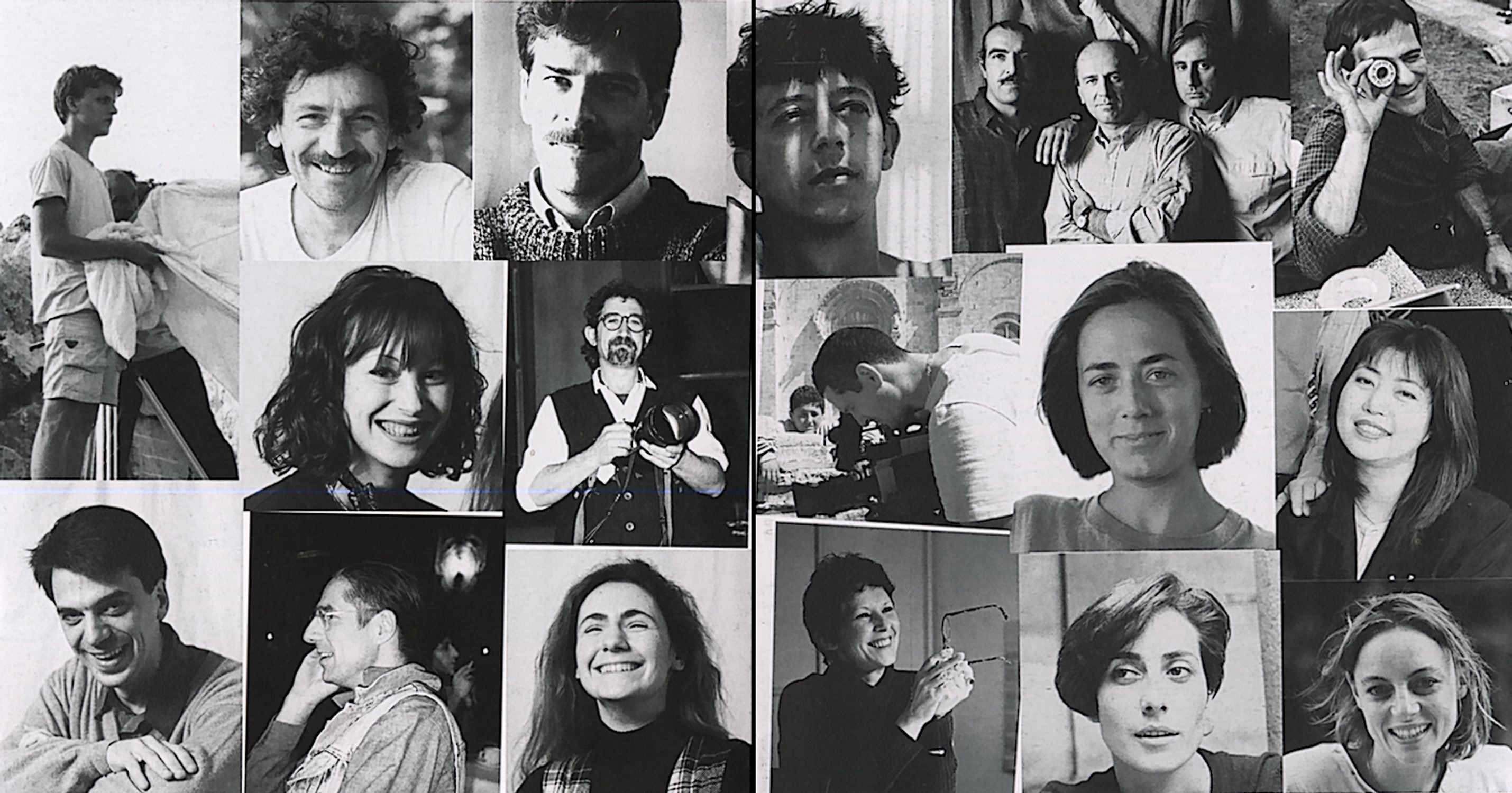 The same ideas can be applied to their approach to theatre and performance, an interest which began around the same time. In an attempt to combine action on stage with video images, they arrived at the idea of the double scene (‘doppia scena’), which sees direct interaction between physical and virtual space, between the body of the actor and the video (Prologo a un diario segreto contraffatto 1985, La Camera Astratta 1987, Delfi 1990). By the end of the 90s, they started to project the scenography that became somewhat interactive, taking on a meaning that goes beyond simple representation. The bodies of the performers interact almost seamlessly with the surrounding atmosphere, both aspects coming together to produce a dynamic display of movement (The Cenci 1997, Il fuoco, l’acqua e l’ombra 1998, Giacomo mio, salviamoci! 1998, Galileo. Studi per l’Inferno 2006, Delfi, cantata 2016). 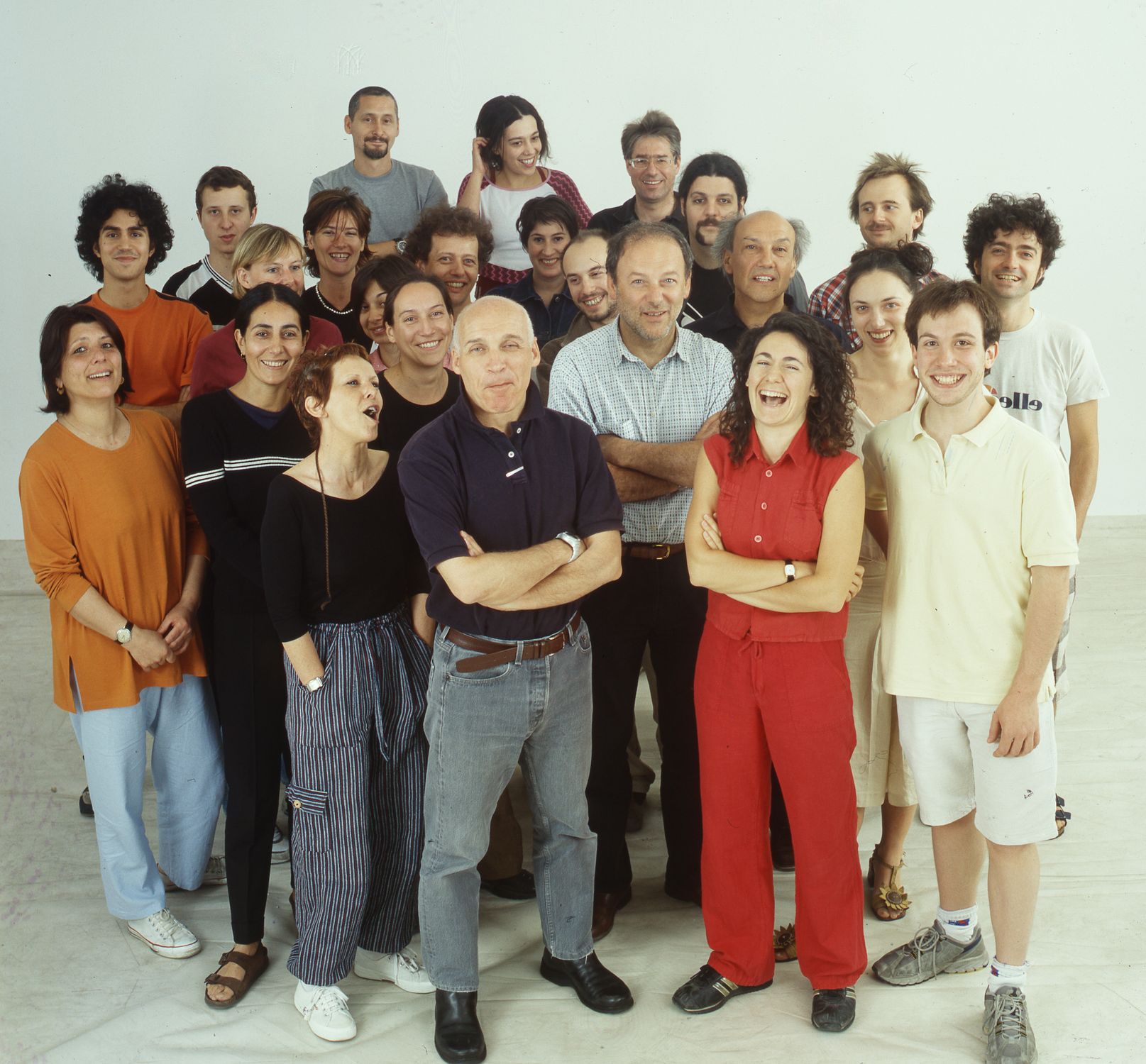 Studio Azzurro’s involvement with cinema, which began some years before the studio was established, can be tracked in the six films they have produced over the course of their artistic journey, notably Facce di festa (1980), L’osservatorio nucleare del signor Nanof (1985) and Il mnemonista (2000). 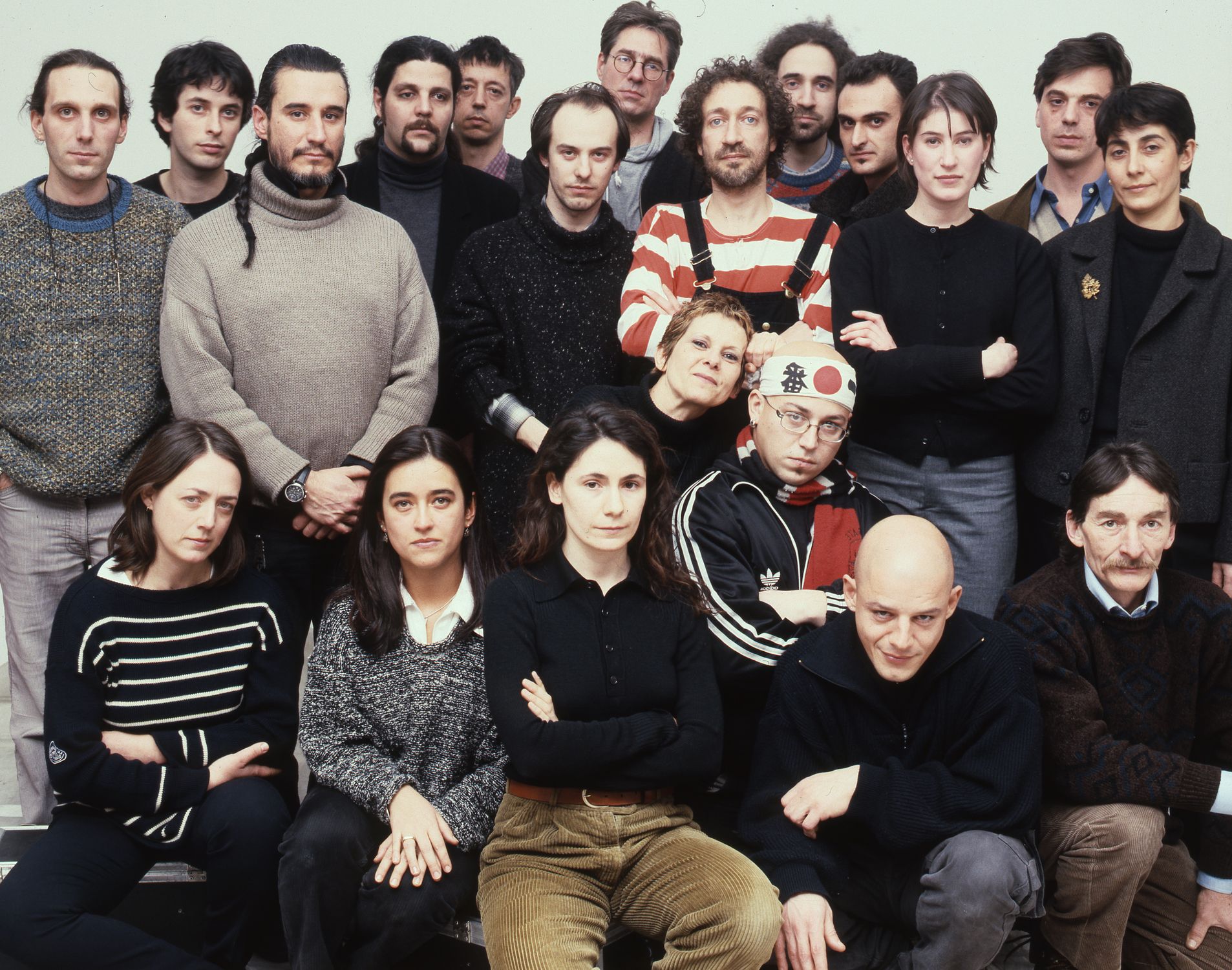 In 1995, research was directed towards ideas about interactivity and multimedia. This resulted in a new body of work, defined as sensitive environments (‘ambienti sensibili’). These environments react to stimulation and see narrative and space fuse together.

Thanks to natural user interface technology, unlike artificial control devices, the narrative transpires from the individual choices of each visitor, who interacts with an invisible system that continuously learns from and responds to their input. This engenders a sense of two-way communication between human and computer. These sensitive environments function with a number of different stimuli: touching (Tavoli 1995), stepping on the floor (Coro 1995), making sounds (Totale della battaglia 1996), blowing (Il soffio sull’angelo 1997), the use of percussion (Tamburi a Sud 2001), crossing thresholds (Dove va tutta ‘sta gente? 2000).

The Mediterranean sea – an interweaving of people, migrations and cultures – has become a point of particular fascination over the years. Since 2002, Studio Azzurro has been on a quest to understand what brings us together and what has made the sea a cradle of extraordinary civilisation that today seems to lose its coordinates. 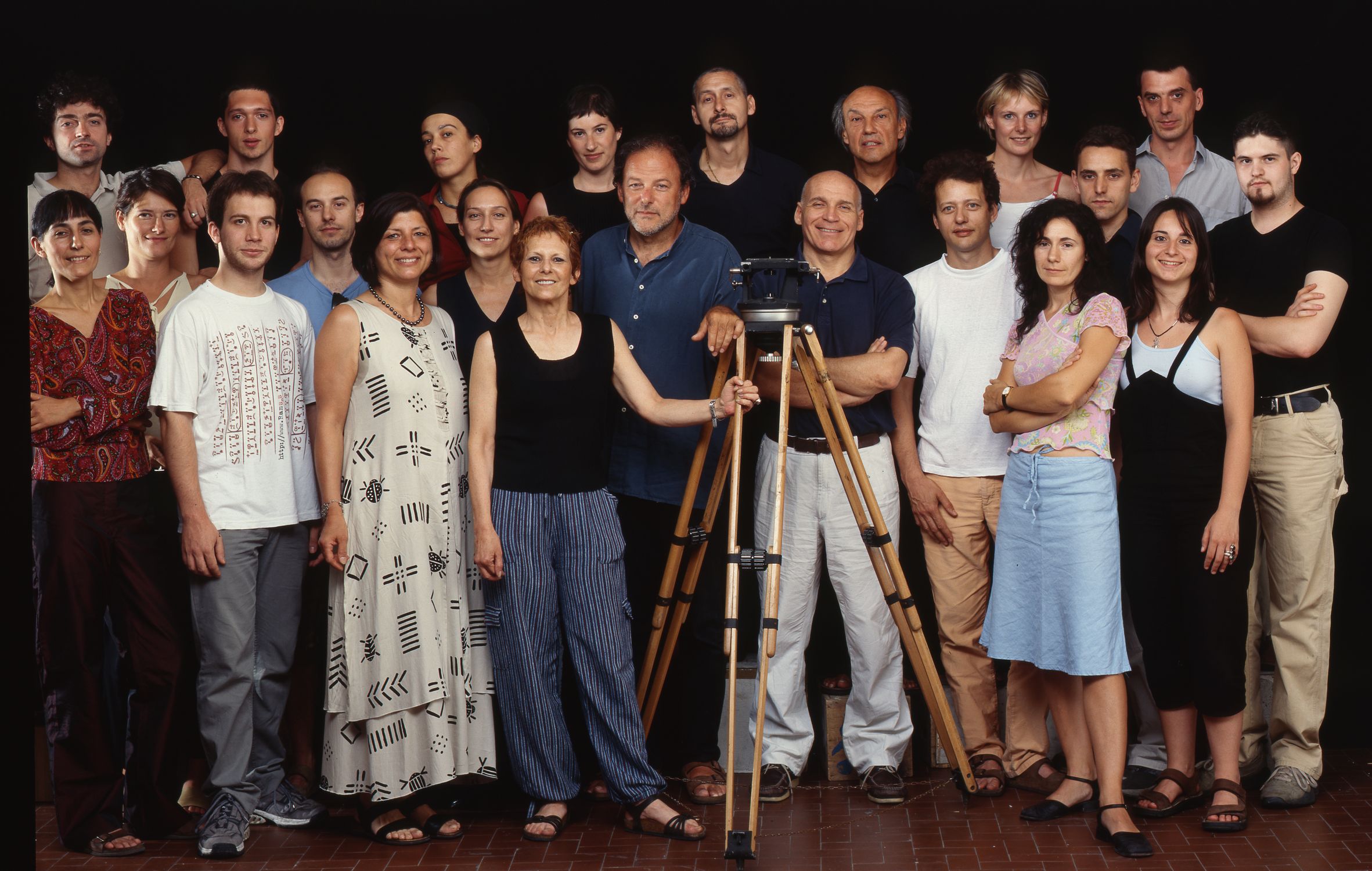 From the beginning of the century, Studio Azzurro’s research has engaged with the Italian territory, its memory and its identity. Experimentation with interactivity and multimedia has been directed towards designing temporary exhibitions and museums. It offers a new approach to the way in which stories of local communities are told. The first work of this kind was Baluardo, 1999.

Museo Laboratorio della Mente (Rome 2008) is a prime example of the idea of ‘museum as narration’ (‘museo di narrazione’), tackling, with an exploratory and experimental approach, ideas about mental unease and the segregation it causes. Through this, Studio Azzurro focuses just as much on the process as it does on the finished outcome, connecting the social fabric with the problems of the Italian territory.

Two works designed and produced for museums by Studio Azzurro have been celebrated for promoting the audience’s involvement. In 2010, Museo Laboratorio della Mente received the Premio ICOM Italia for innovation and appeal to the audience (‘l’innovazione e l’attrattività nei rapporti con il pubblico’) and in 2017, Museo Minerario del Monte Amiata received the Premio Silvia dell’Orso for the promotion of culture (‘la divulgazione culturale’). 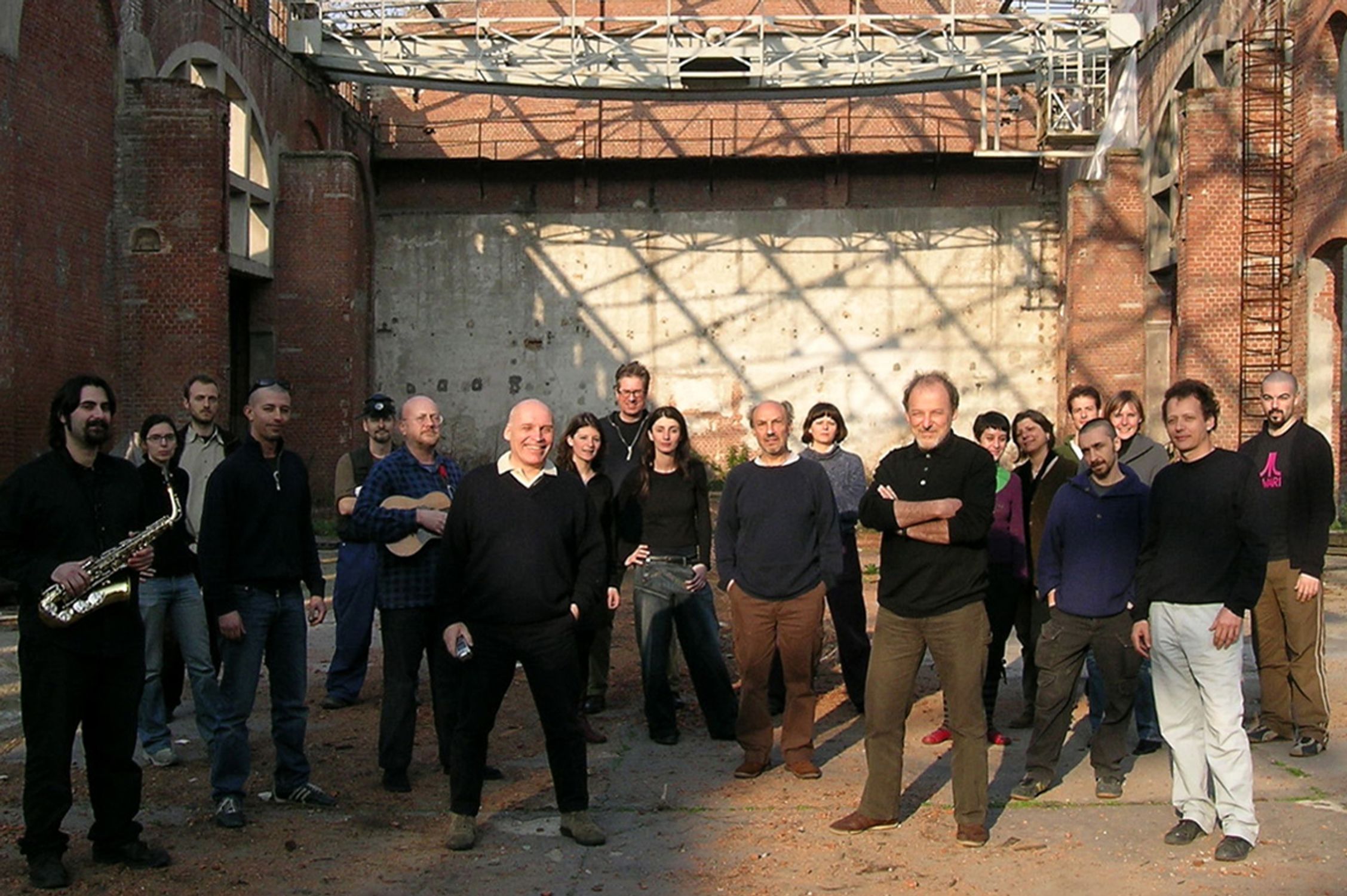 Engaging with the value of memory, place and community has considerably influenced Studio Azzurro’s artistic trajectory. A new series of work – ‘Story Bearers’ (‘i Portatori di storie’) – again plays with the idea of interactivity and sees each visitor participate in their own discovery of local territory through the inhabitants’ recounting of experiences.

The inspiration for the first of this series, which is still underway, came from participating in a workshop in Casablanca in 2008 (Sensible map).

In 2013, In Principio (e poi) was produced for the first Padiglione della Santa Sede alla 55 at the internationally recognised Venice Biennale and is now part of the permanent collection of the Vatican Museums.

Miracolo a Milano (2016), Studio Azzurro’s latest work of this kind, honours the homeless of the city and stands as a homage to the final scene of the film of the same name by Vittorio De Sica e Cesare Zavattini. 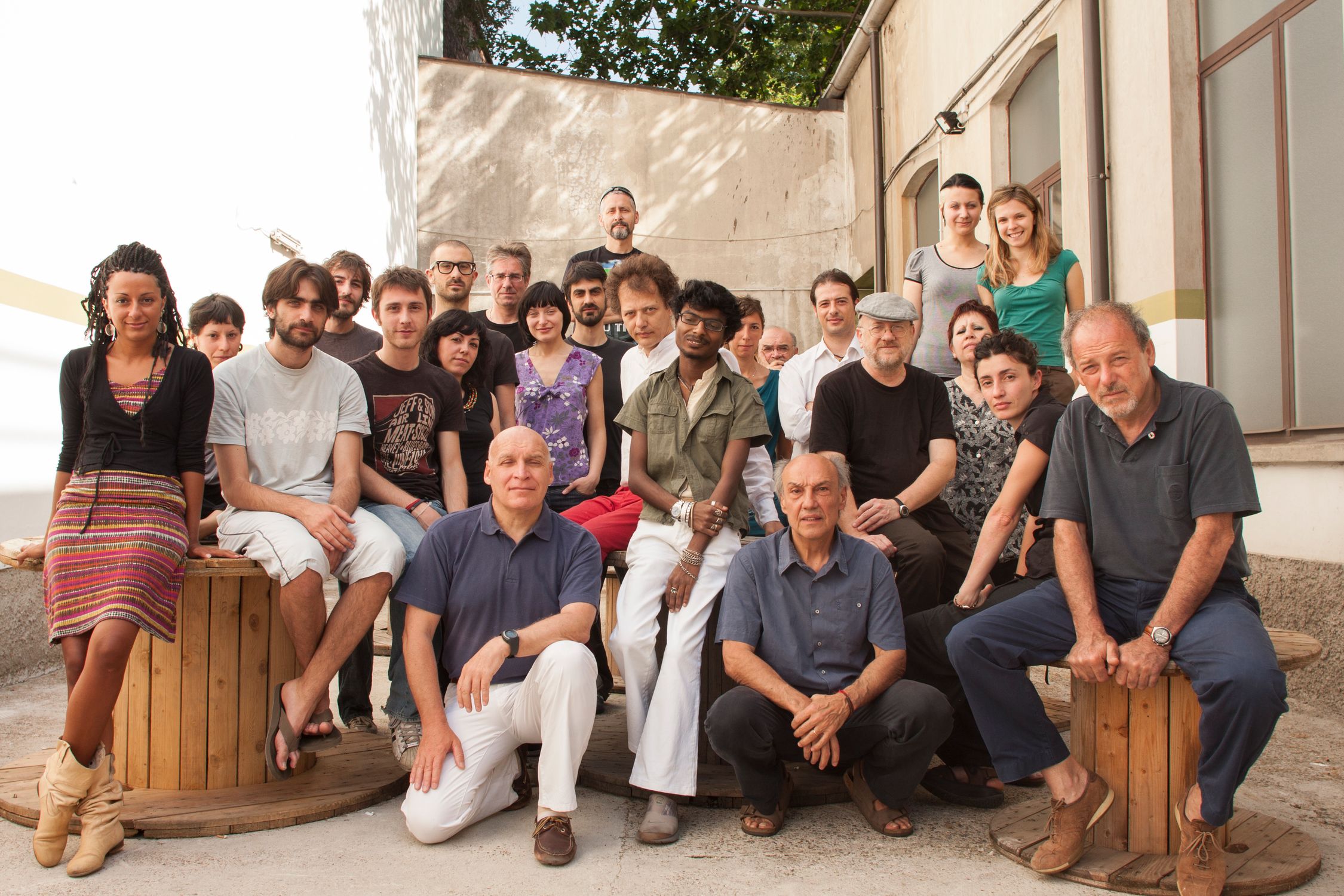 Documenting the work of other artists

Running parallel to research projects and commissioned works, Studio Azzurro has documented over the years the work of other artists. Video documents form part of an ongoing collection which records particularly prolific moments from Milan’s art scene, whether it be to do with poetry, architecture, theatre or music. Key features include the festival Milano Poesia (1988-92), the exhibition that Fondazione Mudima dedicated to the Fluxus movement (1990-94), the first Industrial Design course at Politecnico of Milan. 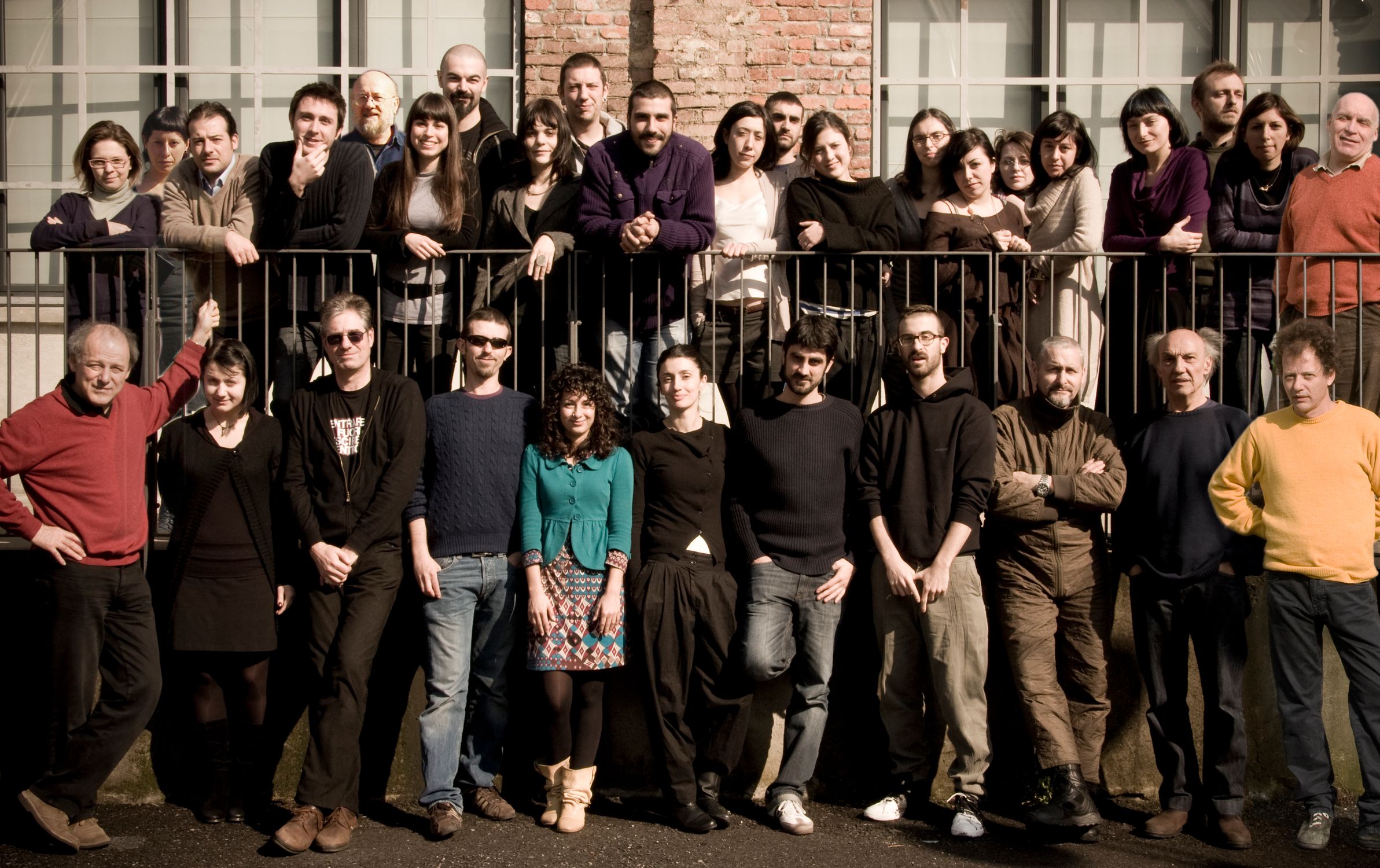 Everything that happens at Studio Azzurro runs alongside a strong editorial production. The publication L’arte fuori di sé, un manifesto per l’età post-tecnologica (Feltrinelli, 2011) written by both Paolo Rosa and Andrea Balzola, theoretically consolidates the reflections of thirty years of practice in artistic and educational backgrounds. It is a critical lens with which to observe the art system, to consider what effect the positioning of the gaze has on the way art is perceived and to reflect on the tensions that occur when making art. The title of the text’s introduction ‘Coordinate per un’inversione di rotta’ synthesises its key ideas. 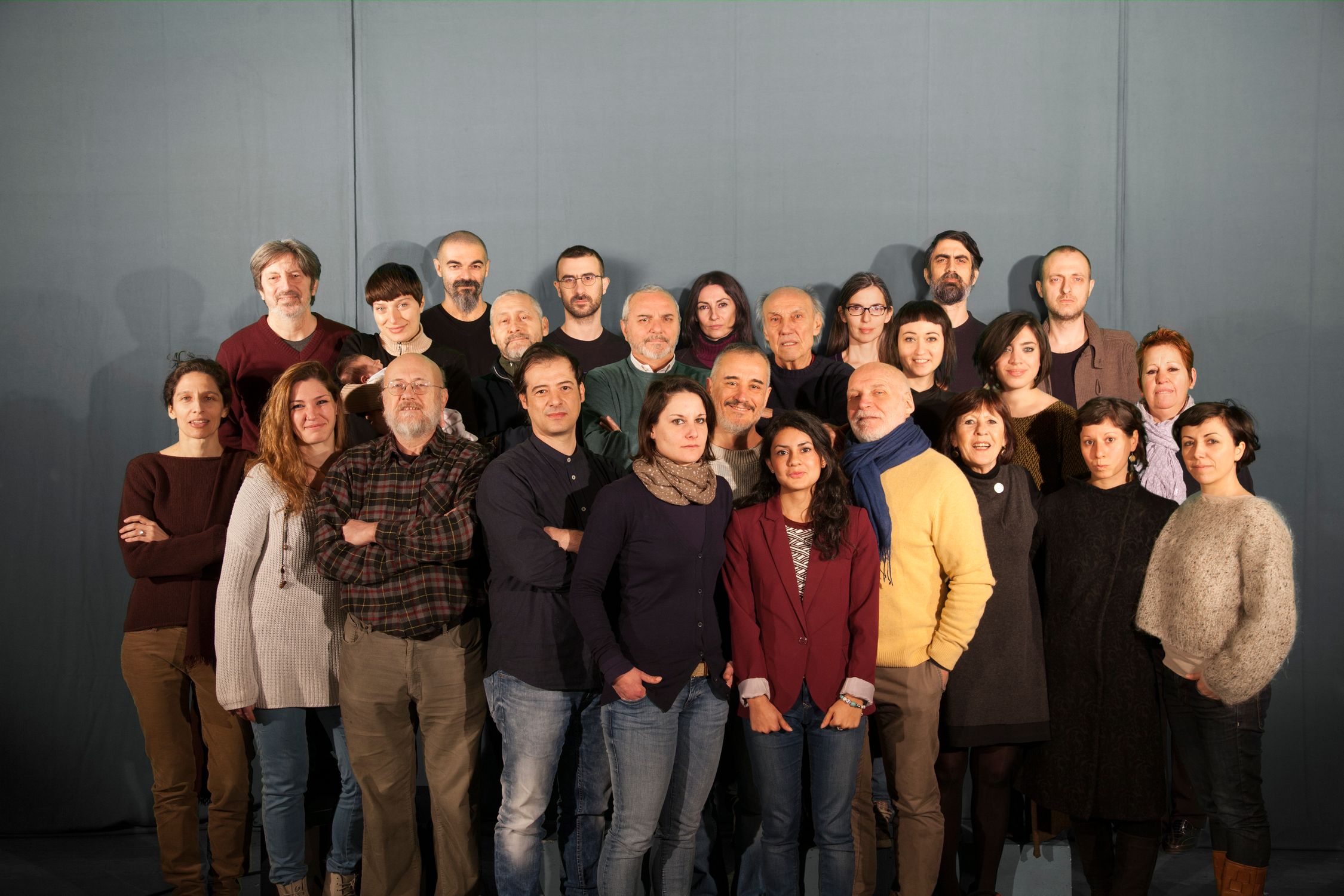 Studio Azzurro: one spirit, many hands

The spirit of Studio Azzurro is a singular entity but lives on in different bodies. It has been formed by many people over years, some having stayed for short periods, others for longer periods. Nevertheless, they have all contributed with their own thoughts and sensibilities, building a creative and united atmosphere that favours Studio Azzurro’s particular type of experimentation: their collaborations have fuelled Studio Azzurro’s ongoing meaningful and articulate conversation. 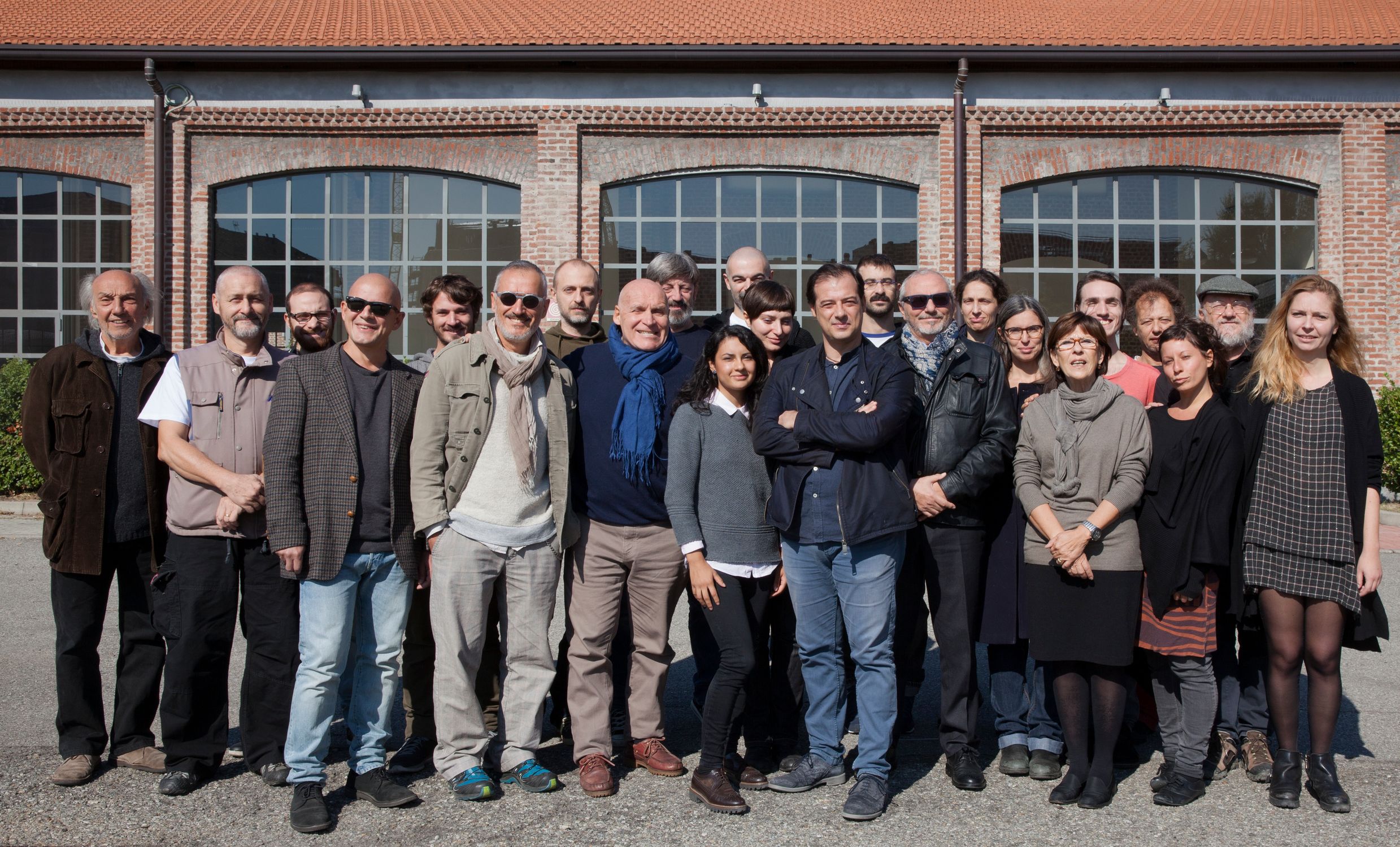 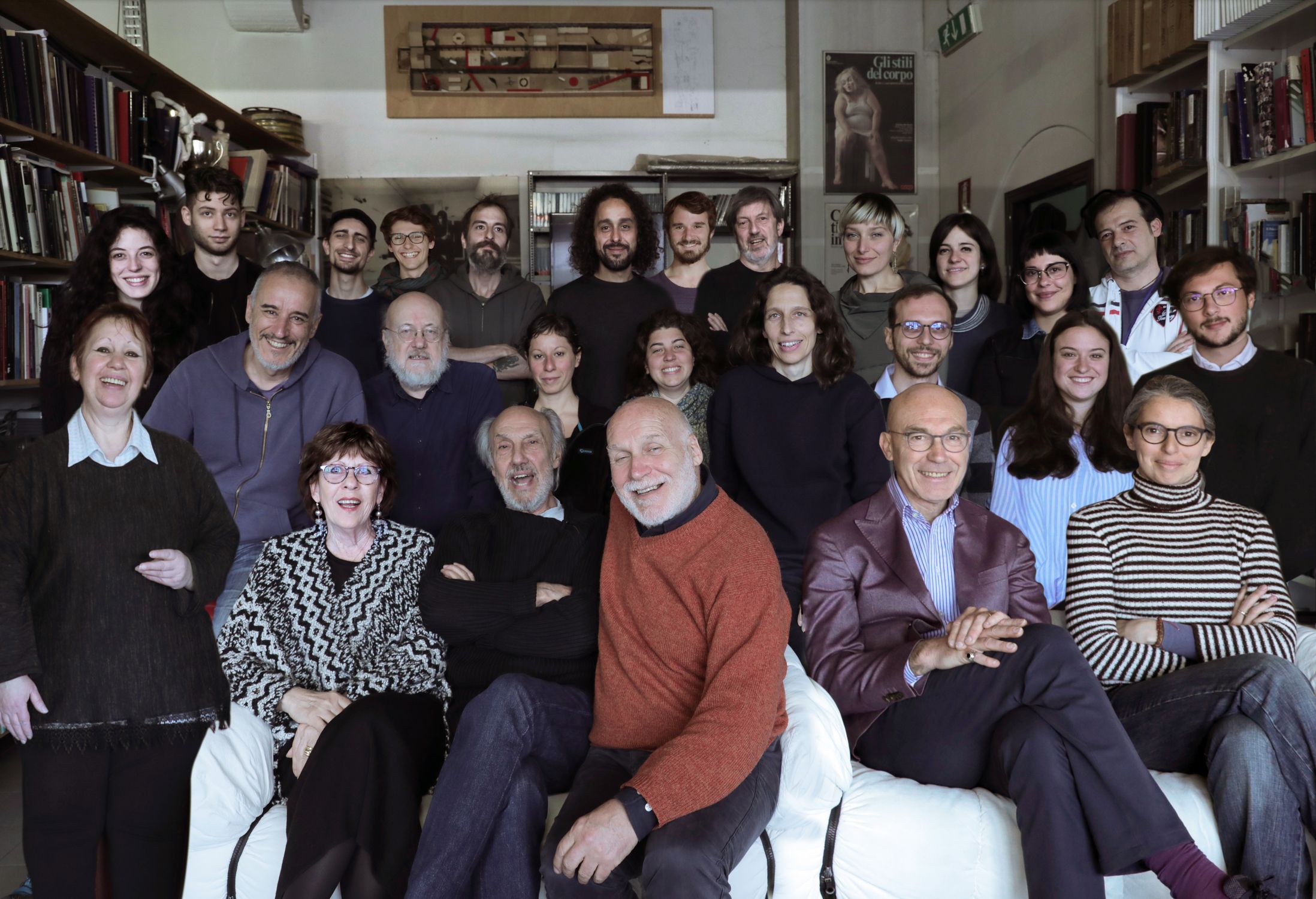